Thank you for coming to Penn and giving a talk on A Free Digital Society; it was an honor meeting you. You mentioned that what you expected of us was to help the Free Software Foundation however we could; I'd like to take you up on that and offer both yourself and the FSF the following advice:

You make a number of very valid points. When a program is distributed without its source code, users don't have as much control as they would otherwise. Internet censorship is on the rise and presents a serious and credible threat to society. DRM is an example of false scarcity and doesn't make sense in the long run.  But every time you use the word Big Brother or call the Kindle "Swindle," or make an aside like "even if you believe that the government had nothing to do with the attacks of September 2001," you go from making an interesting argument about freedom to being the crazy guy shouting at cars on the side of the road. 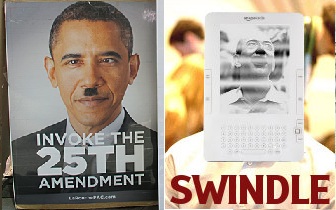 Most FSF marketing materials follow this "you're not listening to us, so we're going to make increasingly outlandish claims" approach. The closest comparison that I can make between the FSF would have to be the Lyndon LaRouche movement. 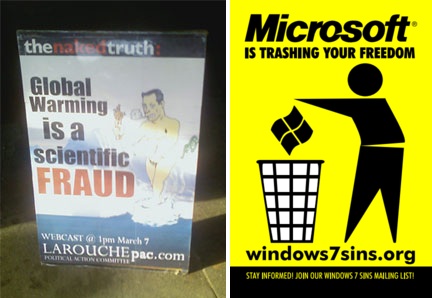 There are numerous arguments in support of Free Software that I can think of that do not have to involve a conspiratorialist tirade. When you talk about the risk of software as a service, you can mention that the US gov't is attempting to collect identifying user data from the Wikileaks Twitter account, or the recent domain name seizures of PokerStars and other online gambling websites. These are practical consequences of a lack of Free Software and, arguably, places where the government has been overstepping its bounds.  These are the arguments I would have loved to hear from you, presented in an even tone and without the usual snark.

In today's world, it's not realistic to ask most users to completely abandon all proprietary software immedialy. Proprietary software is usually better, especially when it comes to UI Design and User Experience. When a student confronted you with this, you responded that if we truly valued freedom we would not mind the inconvenience of (for example) emailing copies of documents around instead of collaborating via Google Docs.

Dr. Stallman, Google Docs is really useful. I imagine you're unlikely to have tried the service yourself, abstaining as you have from proprietary software for the past several decades.  It may be worth trying the service out, if only to better relate to your target audience.

Dr. Stallman, you like to use the argument that proprietary software is like a drug, so let me extend that analogy: today's proprietary stuff isn't marijuana; it's heroin, and it's really, really good. You don't get somebody off heroin by lecturing them about how they should value their freedom; you switch them over to methadone for a while and let them slowly detox.

To that end, please stop accusing users unwilling to shift to inferior software as haters of freedom; all you are doing is insulting us and inviting us to ignore you. Instead, consider offering practical alternatives and first steps for products that you would recommend.  We live in a world where having the technological edge makes the difference between success and failure; asking us to just give up that edge for a theoretical idea of freedom is not going to work.

Do what you do best

Dr. Stallman, I have a tremendous amount of respect for your contributions to GNU, emacs and gdb amongst others. You are a man of considerable intellect and programming ability. That said, I nor the people that I spoke with about your talk found you to be a particularly charismatic or persuasive speaker. The only people that seemed convinced by your speech were the ones who had already been leaning towards your point of view to start with. Several friends of mine who had not heard of the FSF before left half way through because they were so put off by some of conspiratorial rhetoric above.

I wonder whether the Free Software movement might be better served if you spent more of your time mentoring up-and-coming hackers and writing free software that matches in elegance and quality some of the software that you have written in the past. When we asked, you mentioned that you do not write much code anymore. That's a shame.